Adobe Premiere Pro can produce several transitions. The duration and type of transition depend on the context and what the user wants to achieve.

As you may know, there are many different styles for transitions available in Adobe Premiere Pro. Choosing which transition is best for your project can be challenging, so we have put together four amazing transitions that will help you find your perfect match. 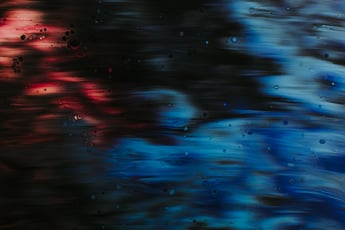 What are transitions in Adobe Premiere Pro?

Transitions are the subtle animations between video clips. They propel your story forward or create emphasis on an object or event. You can use transitions to vary the pacing of your footage, emphasize a particular action, offer unique effects, and more.

Adobe Premiere Pro’s built-in library includes over 50 different preset transitions that you can tweak to suit your needs.

Why should I use transitions in Adobe Premiere Pro?

Transitions are an easy way to create a smooth, professional-looking video timeline. They also make your story move in time, increasing engagement with viewers.

If you're looking for transitions that will inspire your editing skills, check out our four simple yet powerful Adobe Premiere Pro transitions recommendations below.

When you have two photos you are trying to link together, sometimes they can make for strange or challenging transitions. A straightforward way to fix this transition issue is to make the static video appear moving.

To do this, pull the static, non-moving video over to the project panel on the top left side and select the effects controls. 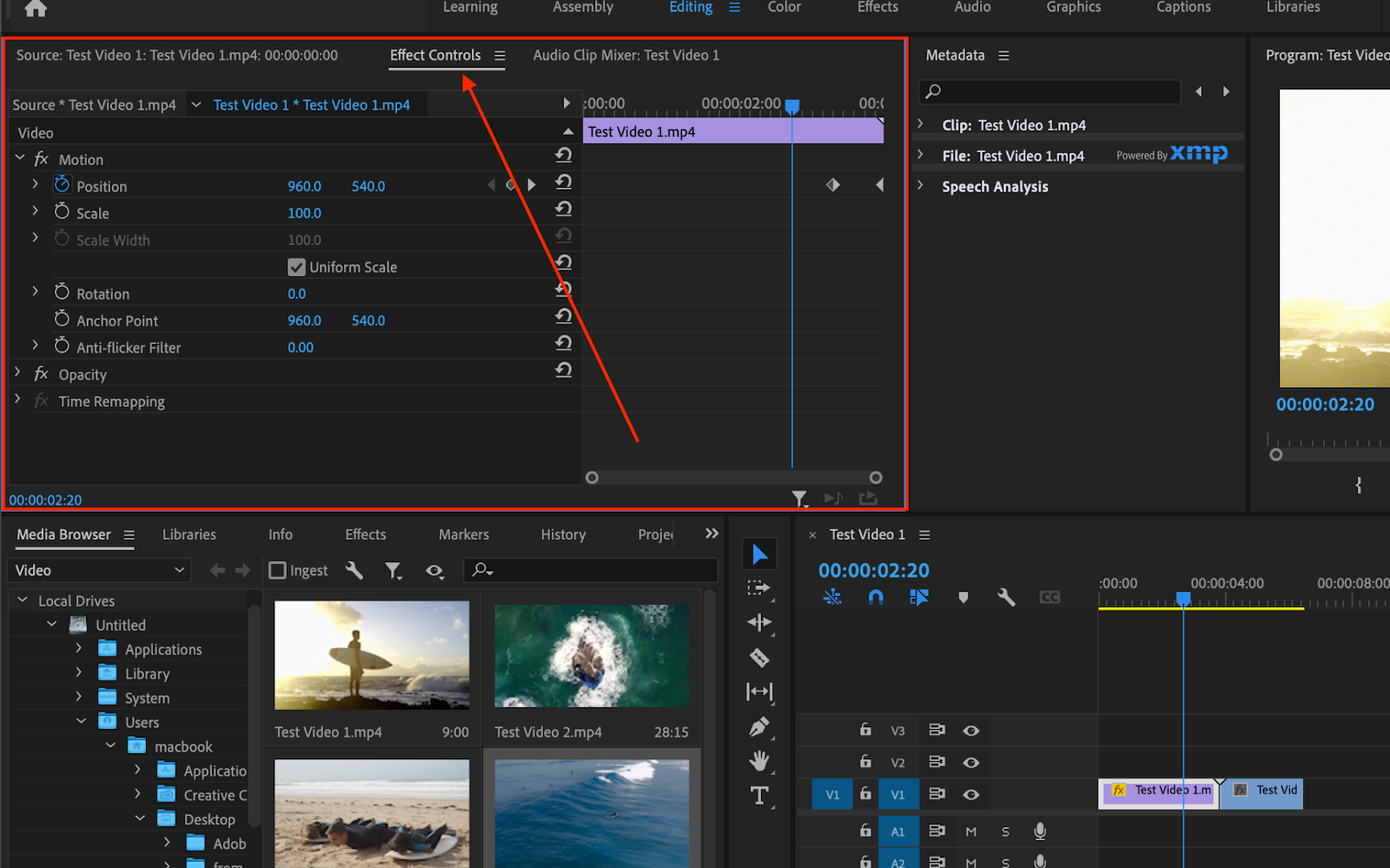 From there, you will then select a position towards the end of the video clip and add some points to move the position of the video.

This will, however, add a black box on one end of the video. 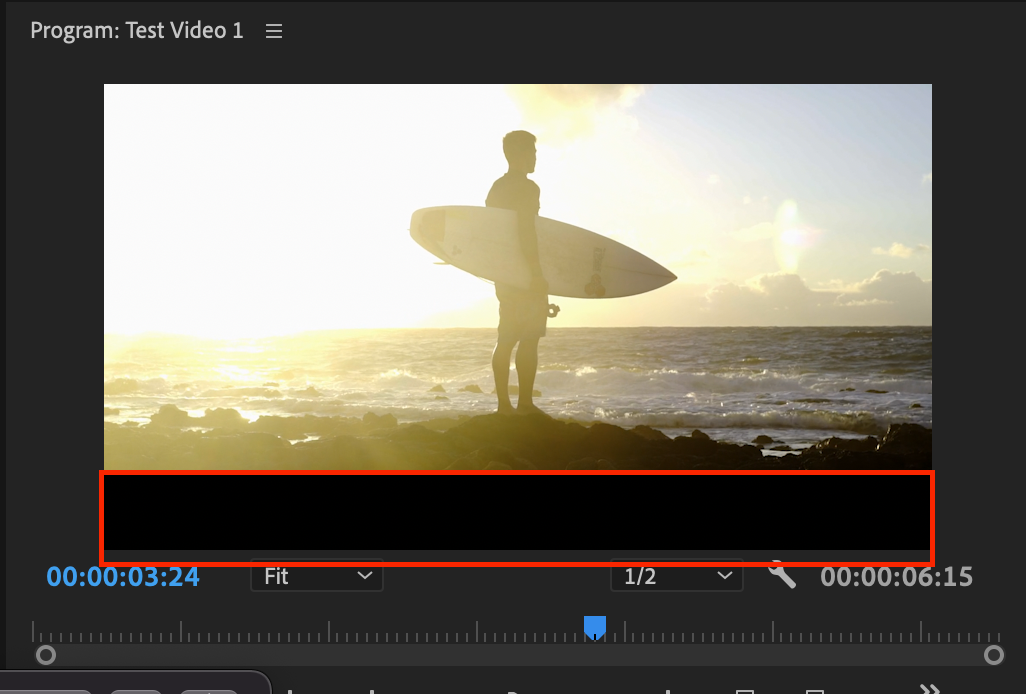 To get rid of this, scale the size of your video so that there is a bit of a zoom effect.

To give the illusion of a moving video with a static graphic, you need to change the speed of the transition by creating keyframes for the Position of the graphic.

To do this, open the dropdown of the Position tab, then click on the beginning of the transition.

Set a starting position by clicking on the diamond shape to set your first keyframe. Move further down the timeline to set your second keyframe.

Change the number of the position by typing in a new number for the new Position points or scroll through the numbers by using your mouse.

You could see the graphic move in your video preview window.

Transition for videos that change direction

When it comes to videos that change direction, it is best to use a transition that matches the change. For example, if your video starts with someone walking from left to right and then switches directions by having them walk from right to left, you should try flipping the direction of one of the videos, so they both walk in the same direction.

By dragging a horizontal flip to the video, both videos will flow in the same direction.

You can help improve the video by cutting out the parts that may be less useful or exciting by using the razor tool to transition from someone exiting the video and the next person entering in immediately after. 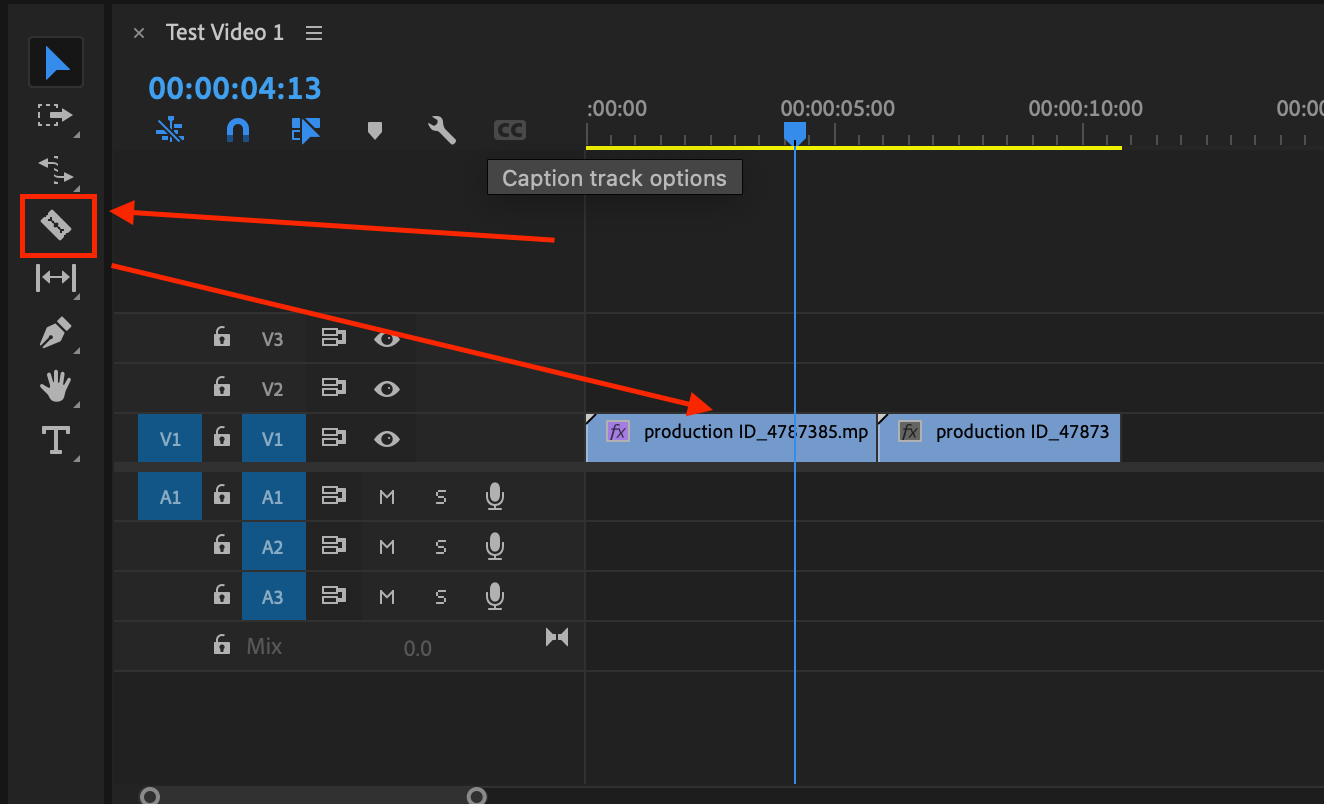 Using the two above techniques will help the viewer know the direction of the video and keep your video interesting by not cutting bits of video for them to watch.

Fade in & Fade Out Transitions

Placing a Fade in transition on your video

After choosing the video you want to fade into, select the video on the timeline to send that clip over to the source panel. 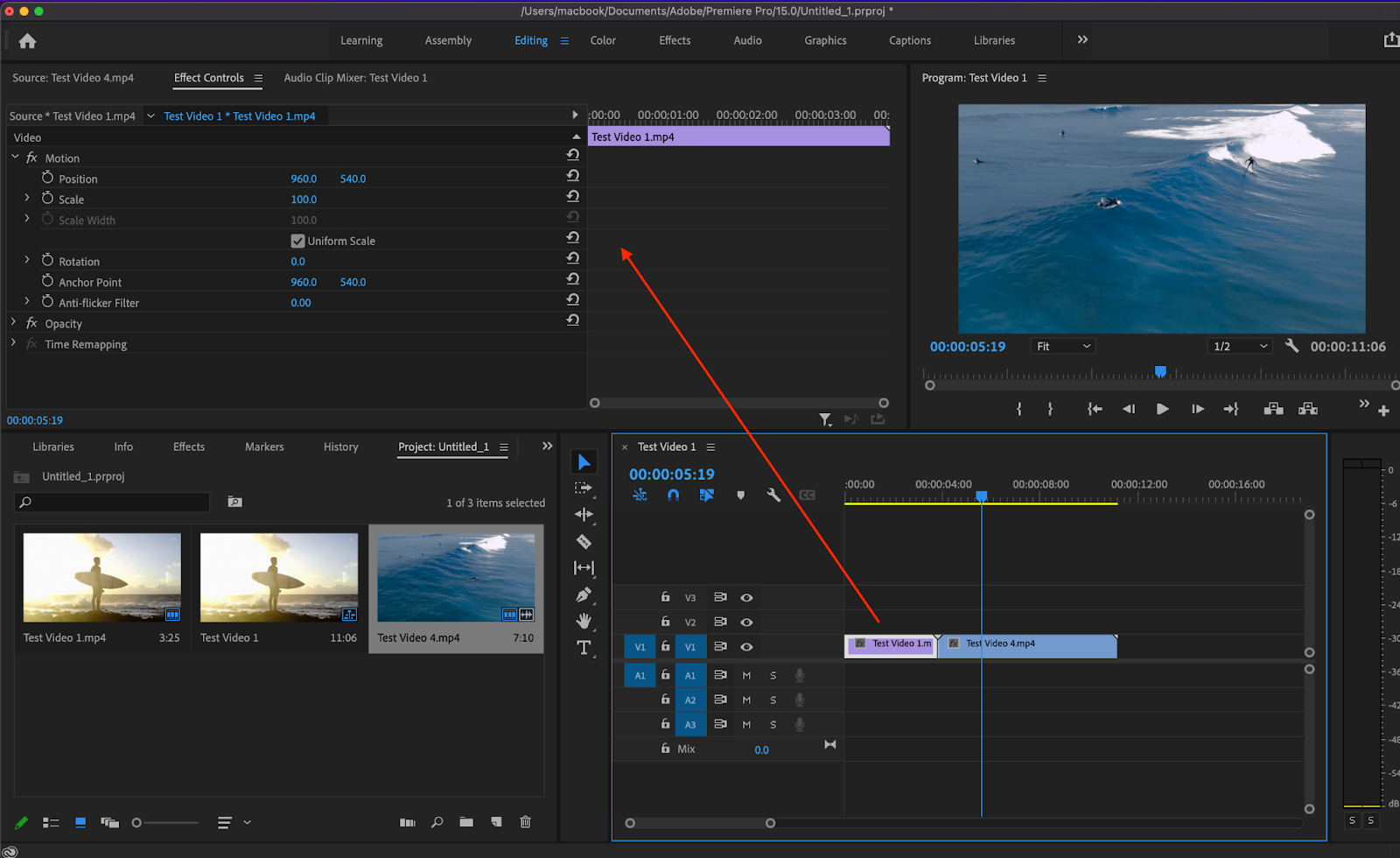 From there, we will select Effects, Control, Opacity, then click the button to apply the first point.

Placing the first point at 0% opacity at the beginning of the video will make the video start black and fade in.

You will then select the next point you want the video to completely fade into. At that point, you will place the end of the opacity and set it to 100%.

You have now successfully created a fade-in for your video.

Placing a Fade out transition on your video

Now that you have learned to place a fade-in transition, we are pretty confident that you can easily add a fade-out transition as well. As you may have guessed, it’s almost the same as the fade-in, but the exact opposite.

Somewhere near the end of your video, where you want to start the fade-out, place the first point and leave the opacity at 100%.

Next, go all the way to the end of that video clip, and place another point. You then will change the opacity to 0%.

Now you have a successful fade-out.

Creating a fade-out, then a fade into the following video clip makes for a fantastic way to transition seamlessly into the video clips.

Auto Fade in and Fade Out, or Dip to Black transitions

The above fade-in and fade-out transitions are for manual purposes and great to learn, but this may be a bit more difficult for some of the more beginner Premiere Pro users. Luckily, Adobe has pre-installed a transition into Premiere Pro that will allow you to “Dip to Black” between two video clips.

You will need to stack your videos on different levels to start the Transform Transition. The first video will start on the second layer and the second video on the first layer. From there, you will overlap the two videos slightly like the below image. 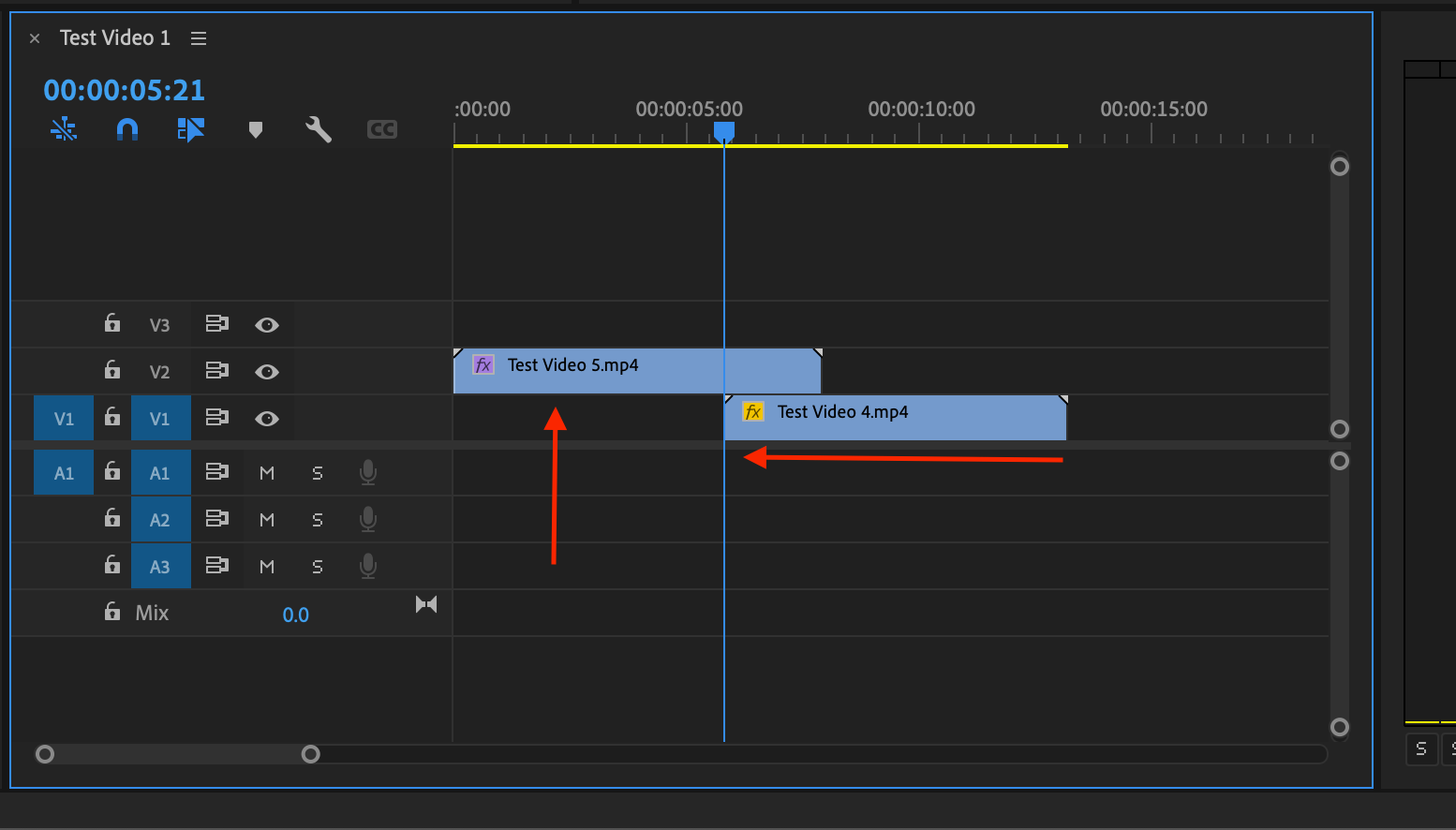 On the top video, drop on a Transform effect.

After placing the Transform effect, find where you want the transition to happen, then keyframe your position at the beginning of the transition. 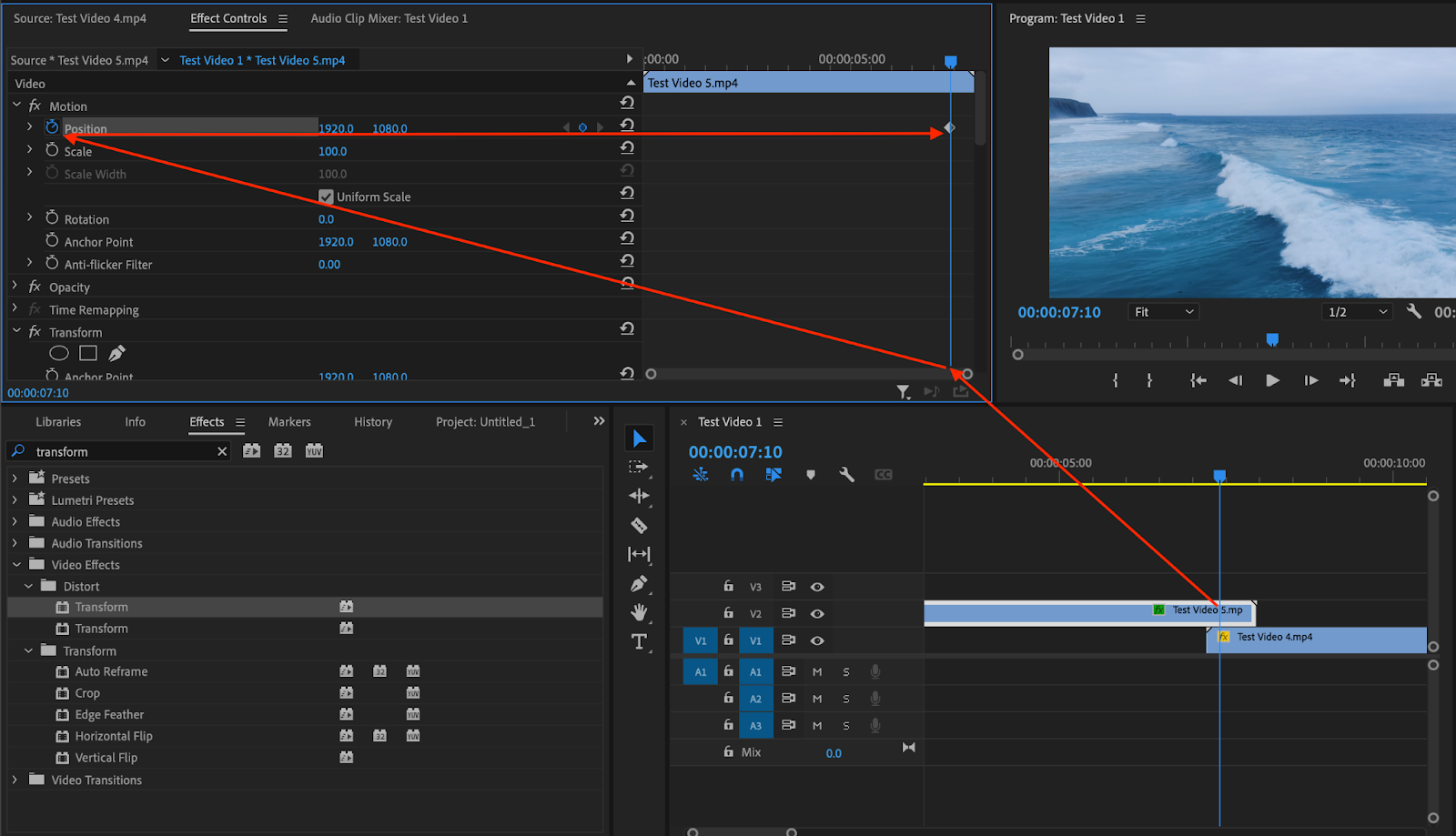 Next, you will move to where you want the transition to finish and move the position to place the top clip off the screen. Be sure that there are two videos playing at all times during this transition; otherwise, you will have parts of the transition that have a black screen. 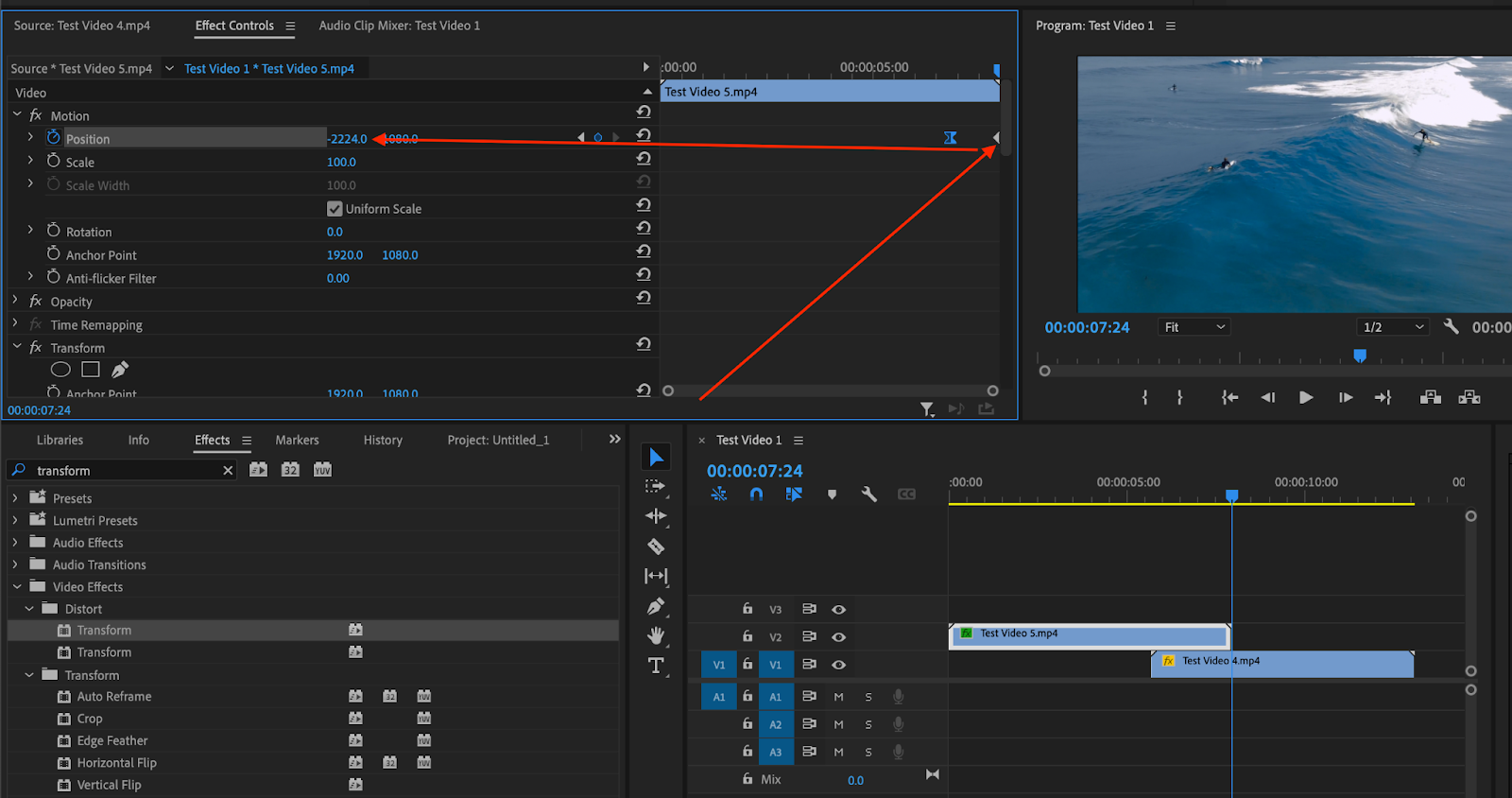 From here, you will want to be sure that the transition looks natural.

To do this, press the little down arrow next to “position” to activate the graph for the motion.

The final touch to allowing your video to have a natural look is to unselect “Use composition Shutter Angle” and manually place a Shuttle Angle of 180. 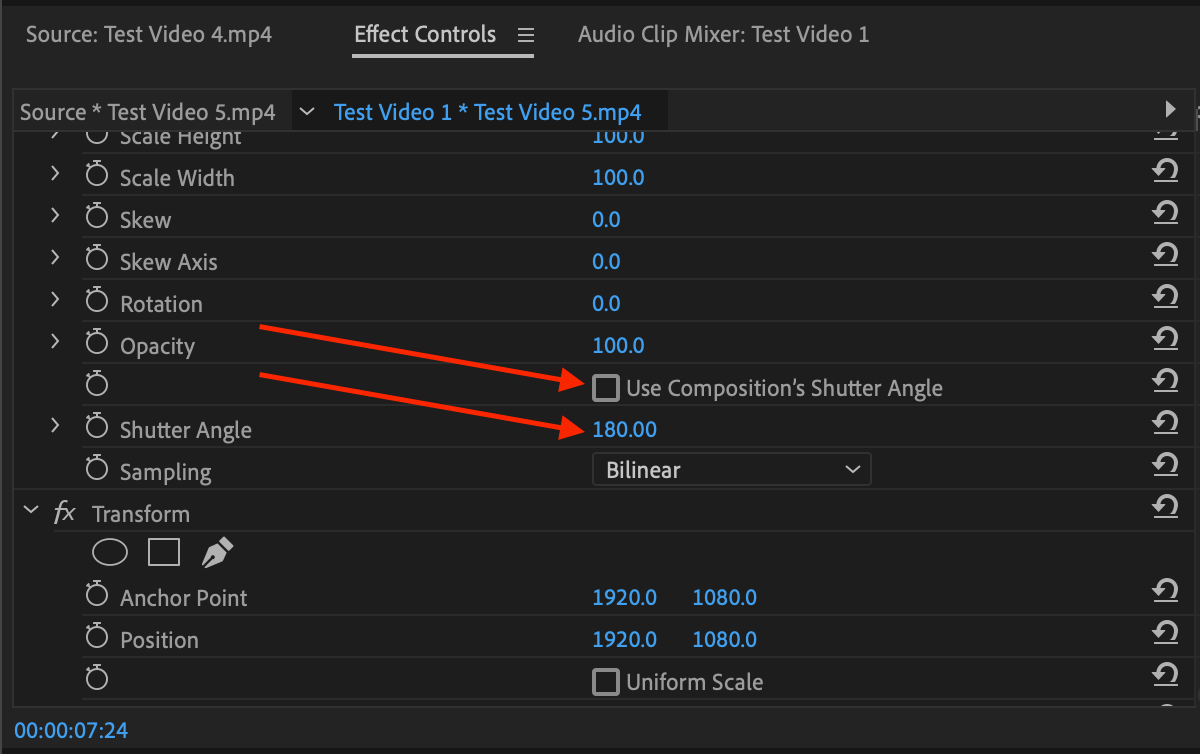 This will allow a bit more of a realistic blur to the movement of the video between transitions.

Adding video transitions can give your videos a more polished and professional look.

There are many different video transitions that you can use to achieve different effects. By experimenting with the different types of transitions, you can find the right combinations to create the perfect video for your needs.

The possibilities are endless, whether you add a fade-in or out, a Transform effect, or even multiple layers of transitions. With a bit of practice, you can create videos that will impress.

If you are looking for more transitions, check out the Effects panel > Video Transitions tab for a bunch of very effective transitions that have been downloaded! 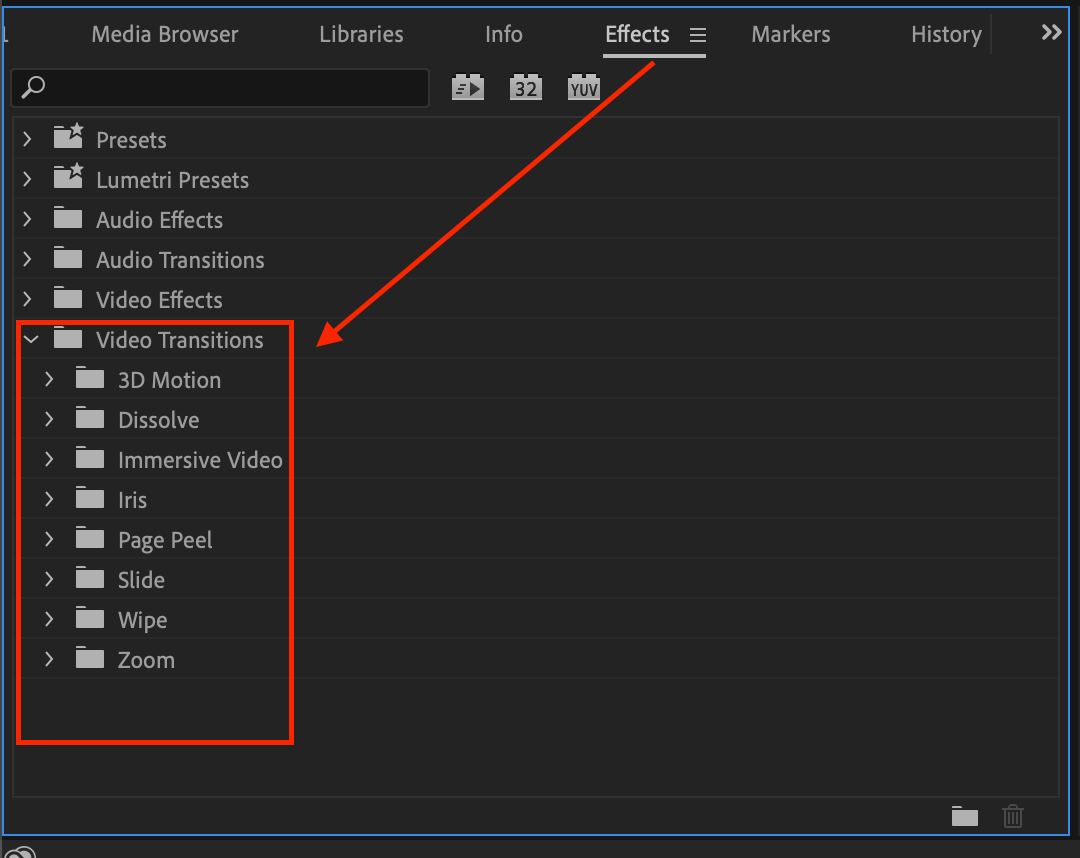 For a more in-depth online class for mastering Premiere Pro transitions, see our one day class

Join our Facebook Group to be a part of a community of creatives.

Check out our YouTube for more tips and tricks about Adobe Premiere Pro.