Adobe Animate vs. After Effects

Adobe Animate and Adobe After Effects are two great software options that every animator, motion designer, and video editor needs to know. They both have their unique benefits and drawbacks, which is why it can be difficult to decide which software to use for your next creative project. . In this guide, we will compare Adobe Animate with Adobe After Effects to help you decide on when and how to use them to create your next animation. 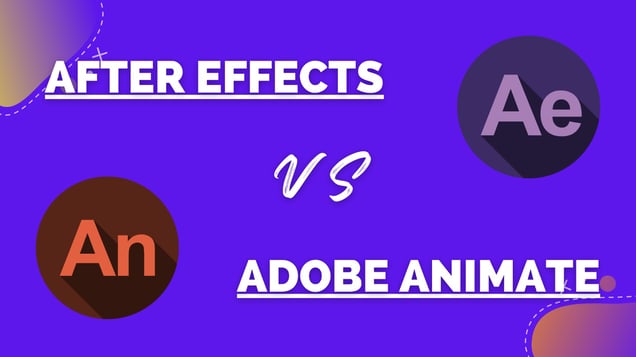 Use Code: BLOG10  At Checkout To Save 10% off our Online Adobe Animate & After Effects Courses

Adobe Animate CC (formerly called Adobe Flash) and After Effects are animation programs manufactured by Adobe. If you are an experienced animator, this guide might be a good reminder for you. If you are just starting to learn animation, reading this article might save you a lot of time and money. So, read on!

Adobe Animate is a good software for creating 2D animations. You can use it to create sprites, traditional animation, and motion graphics. It also has a wide range of features for interactivity, such as buttons, input fields, and more.

For example, if you want to create a cartoon or even a traditional hand-drawn frame-by-frame animation, Adobe Animate is a good choice.

In the past, Adobe Flash Professional used to be the only program for animators. It was first released by Adobe in 1996 for vector graphics and vector animation. Throughout the years, Adobe Flash increased in popularity and gained new features until ultimately, it was renamed Adobe Animate in 2016. Imagine a software program that grew and improved for over 25 years! There are thousands of animated films and series created using Adobe Animate by animators around the world. It is also one of the go-to tools for Youtubers.

Creating character animation is one of Adobe Animate's strengths. You can create character rigs, control poses, and animate them easily. Adobe Animate also has a bone tool that lets you create realistic skeleton animations.

You can export your animations to many different formats including HTML5, SWF, and MP4. Adobe Animate is also one of the few programs that can export to FLA format. Adobe After Effects can't do this. FLA files stores all the resources from the animation project including assets like graphics, audio, videos, etc., and the other tools and the project timeline.

Puppet character animation is a newer technique that is growing in popularity. Adobe Animate is one of the few programs that have this feature. Puppet pins let you control the movement and shape of a character's body parts easily. You can also use them to create realistic motion curves.

Adobe Animate is also a good choice for creating web animations. You can create SWF files that play in browsers or HTML5 files that work on tablets and mobile devices.

Creating frame-by-frame animation from hand drawings is Adobe Animate's other strength. Adobe After Effects can't do this. Adobe Animate has a wide range of features for animating your drawings, such as onion skinning, which makes it easy to see the previous and next frames while you are drawing.

Adobe After Effects is great for creating motion graphics, including animated titles, logos, "lower thirds", visual effects, infographics, and more. You can also use its compositing features to combine different video clips and images and create a single cohesive scene.

For example, if you want to create an intro for your video, a promo - or "explainer" video, or a title sequence, use Adobe After Effects.

Adobe After Effects is also great for creating visual effects. With its built-in tools, you can create fire, smoke, and other realistic effects. You can also use its keying features to remove a background from a scene or combine multiple scenes into one.

Which is better for you?

Now that we have looked at the basics of Adobe Animate and Adobe After Effects animation software, it's time to decide which program is better for your animation process.

Second, ask yourself what you want to create: an intro for your video, a promo video, or a title sequence? Adobe After Effects is the best software for this type of work.

Finally, ask yourself if you want to create visual effects. Adobe After Effects is the best software for this type of work.

As we have seen, Adobe Animate and Adobe After Effects are both great animation programs with their unique benefits and drawbacks. In the end, it all comes down to what you want to create, your experience level, and how much time you want to invest in learning.

Adobe Animate vs. After Effects for beginners

Adobe After Effects tips for beginners:

Adobe Animate vs. Adobe After Effects for professionals

Are you looking to get Adobe Certified?

FMC Training is the leading provider of Adobe certification exams. We’ve helped thousands of people just like you pass their certification exam and land that dream job. Our training material is written and recorded by industry experts who know what it takes to succeed in today's competitive market.

After Effects Info and Tricks Blogs