Animation and Masks: How To Mask Text in After Effects

Very often, I encounter After Effects students that want to create text animation that appears to start from inside of the viewable area. This is a very easy process that can be mastered in a very short period of time. Let's begin and learn how to use text animation and how to mask text in After Effects!

How to mask text in After Effects?

Let’s start by opening After Effects and creating a composition.  For this tutorial, let’s make its size 1920 x 1080. In here, we will write two separate lines of text separated by a solid bar from which the text will eventually appear.

Let's type the first line of text, which could be anything you want. Create another text box and type a second line of text.  Align them and position them so that one is on top of the other. After you are done, make sure that no layers are selected.

Grab the rectangle tool and draw a line that will go in between the two lines of text. After you are done, the text and line will look something like this. 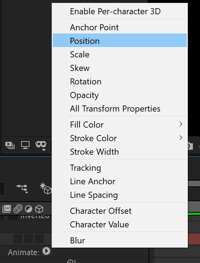 Now we will add a Text Animator to the first line of text. For this blog, let’s add a Text Animator for "Position" and have the letters come down one letter at a time, starting with the first letter. Select the layer and click on the Animator menu and choose Position.  A new item is added to the text layer and it’s called, by default, Animator 1. Change the Y value of the animator so that all the text travels down about as much as the font is tall (if it goes down a little more, that’s ok).

Now let’s keyframe the Range Selector:  Expand the Range selector and position your play head (the Current Time Indicator in the Timeline) at the point in time where you’d like for the animation to begin.

Then click on the stopwatch icon to the left of the word start.

Move the play head to the point in time where you’d like for the animation to end, and change the value of “Start” to 100%. You’ll be left with two keyframes in the timeline – they are represented by the diamond-shaped icons.

Move the playhead so that it is on top of the first keyframe you created (press the letter J to get there quicker). Now that we have the keyframes ready for the first line of text, we would like to copy the animation. To do so, click on the word “Animator” and copy (CONTROL + C or COMMAND + C).

Click on the name of the layer of the other line of text and paste (CONTROL + V or COMMAND + V).  You now have the same animation on both lines of text. To see the animator and the keyframes, select both layers and press the letter “U”. 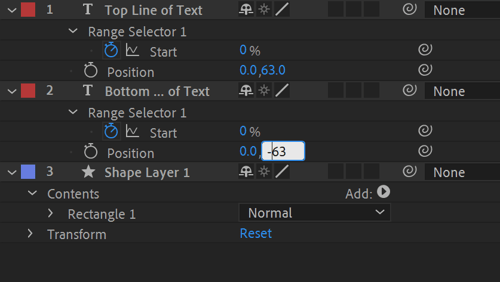 All we have left to do now is mask the lines of text. Move the play head so that it is to the right of the keyframes, which is after the animation has ended, and then:

Play your animation, and you should now have text that seems to grow from the line! Feel free to play around with the Text Animator. In this lesson, we used the text animator for Position, let's see what other effects can be achieved when using the Text Animator for Scale, Skew, Rotation, or Opacity! If you create something, feel free to share it on socials and tag @FMC_Training. We'd love to see what you can come up with!

Luisa Winters is a Certified Instructor for Adobe and Apple (ACI and ACT). She consults for organizations and works at several different training centers all over the United States and abroad. Luisa is one of the few Adobe Premiere Pro Master instructors. A well-known artist, Luisa often speaks at different conferences on topics ranging from video editing to compositing and web.

Luisa Winters is an internationally celebrated pilot, instructor, presenter, and musician. An accomplished videographer, editor, 3D animator and graphics designer, she has created and edited scores of broadcast video and web projects for corporate, government, and educational, commercial and private clients. Luisa is a private pilot, and can often be seeing flying her club's airplane out of Freeway Airport (W00), near Washington D.C. An Adobe Master Instructor, Luisa has been an educator for over 30 years teaching Adobe, Apple and production classes for clients in government, military and private organizations. Luisa specializes in training and consulting for our brave men and women of the military. Having trained hundreds of students from Combat Camera, DMA, Air National Guard, Marines and others, makes Luisa the ideal instructor who understands the needs of the students. "Flying and teaching became natural to me; if we can teach people how to fly, they will continue life believing there's nothing they cannot do."
FMC provides quality, consistent and accessible training for content creators and IT professionals.