More of the same: 6 ways to duplicate elements in After Effects

The ultimate goal of any design is to make an impression. When it achieves this goal, it fulfills its purpose: communicate the message it was intended to convey.

Repeating some aspects of a design throughout a piece is a great design practice.  We use repetition to create a sense of unity and consistency.  It can create emphasis, hierarchy, and structure.  The more we see something, the more we familiarize with it, and as a result, remember it.

This approach can help expand an idea, and it can often take us in a new direction.  We can use repetitions through colors, typeface, shapes, patterns, alignment, tone of voice and so on.

In this article, I’ll share with you 6 ways to repeat graphics in After Affects using five built-in tools and two 3rd party scripts. You can use the project file I’ve included below, or work with your own assets to test those technique and include them in your work.

{download the project file} After Effects 2019 or higher is required.

You can use the shape layer Repeater operator to create multiple copies of a shape, applying a specified transformation to each copy. The Repeater path operation creates virtual copies of all paths, strokes, and fills above it in the same group. The virtual copies are not represented by separate entries in the Timeline panel, but they are rendered in the Composition panel. Each copy is transformed according to its order in the set of copies and the values of the properties in the
Transform property group for that instance of the Repeater.

The Puppet tool is a great way to deform part of an image according to the positions of pins that you place and move, but it can also be a great duplicating tool.

To use it for repetition, you’ll need to add just one pin, and then you can duplicate the Mesh and change the position under the Deform > Puppet Pin 1.

I suggest to use the new Advanced Pin Type to get maximum control of the duplicates. This way you can scale and rotate them after the fact. The result is one layer with all the duplicates you’ve created, which is easier to control later in the process.

You can use the Clone Stamp tool to copy pixel values from one place and time and apply them at another place and time. The Clone Stamp tool samples the pixels from a source layer and it applies the sampled pixel values to a target layer; the target layer can be the same layer ,or a different layer in the same composition. I recommend using this tool on a solid layer, and turning on “Paint on Transparent” in the Effect Control Panel, at the end.

You’ll need to work inside the Layer viewer and point the tool to Clone Source from the desired layer, in this case the “Palm” layer. To sample pixels, use the same method as with Photoshop, by ALT/Option clicking on the area you want to sample, and then using the Stamp as a paint brush in the desired location.

After you created the first clone you can duplicate Clone 1 in the timeline, open its Stroke Options and, under the Transform option: Clone >> modify the Position >> Scale and Rotation of the clone.

Repeat it as many times as you need, and change the geometry properties to create different appearances from the same source. You can also animate the Start or End values of the brush, under Stroke Options, to create a paint-on effect. 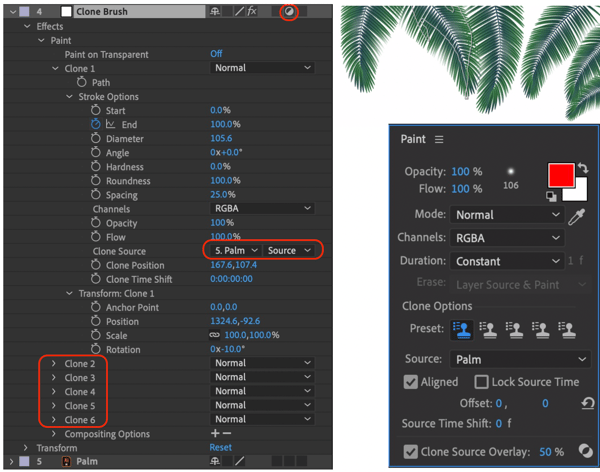 can also serve as a great repetitive tool because all of the tiling options it offers.

In this case, I’m using it to expand and repeat the fence as well as animate it over time to create a cool reveal.

I always loved the little joke in the effect name :-)

When thinking about repetitive elements, the easiest and most flexible way to create them is using a particle system. After Effects comes with few effects that can help you achieve that. Most of them are under the simulation category, but you can also opt for the Radio Waves effect if you are willing to settle for masks only.

3rd party effects are another way to create sophisticated particles and repeatable elements. The most popular effects can be found in Trapcode Suite. Alternatively, you can also try Stardust and Element.

If you don’t want to invest in these tools, you can try the built in CC Particle World effect which allow to define any layer as a texture and use it to create a as many duplicates as you need and control all of them as one system with basic Physic and particle control.

In this example, I’ve created a simple bird animation and I’m using it to create a flock of seagulls that fly across the sky.

Sometimes, you may need to take a more hands-on approach—meaning that instead of using the techniques shown above, you may want to just duplicate individual layers and control each layer separately. If that is the case, there are two handy scripts that can help you work faster and be more efficient.

The True Comp Duplicator is a Name Your Own Price script which creates a complete duplicate of selected comp hierarchies, including sub-comps with many options. Read more and download it here.

The True Layer Duplicator script resembles True Comp Duplicator, but with a twist—it works on Comp based layers. That meant it will duplicate the selected layer, but it will also duplicate the inner Hierarchy of the layer. This will save you the time of manually duplicating and replacing the relevant layers (with or without TrueComp duplicator), while keeping the changes made to the original layer. Read more and download it for free here.

I hope this tutorial was helpful and that it gave you insight into the vast world of Adobe After Effects. Stay tuned for more posts from FMC and keep learning!

Eran is an Adobe expert trainer and a desirable speaker at industry conferences such as NAB Show, After Effects World, and Adobe Max. He is an author of many poplar video tutorials and training series, and he is part of the creative team at Future Media Concepts.
FMC provides quality, consistent and accessible training for content creators and IT professionals. 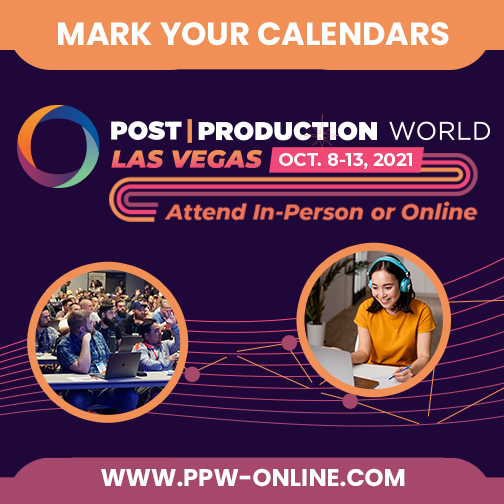