Everything You Need to Know About Becoming a Film Colorist

Anyone who has ever tried to capture a sunset or the perfect ocean wave knows that getting the colors right in a photo or painting can be challenging. The same is true for film!

Achieving the perfect color balance is essential for creating an immersive and believable world on screen. That's where film colorists come in. Film colorists are responsible for ensuring that the colors in a movie are consistent and complementary.

They work closely with the director and cinematographer to create a color palette that will enhance the mood and themes of the film. In addition to their creative skills, film colorists must also have a strong understanding of the technical aspects of filmmaking, such as lighting and camera angles.

If you're interested in combining your artistic talent with your technical know-how, a career as a film colorist may be the perfect fit for you!

What Does a Film Colorist Do?

Colorists influence a film's emotional and aesthetic tone by defining its colors. They work with the director and cinematographer to choose the palette, whether restrained or hyper-colorful, and whether it employs milky hues of primary colors. Colourists may impact these appearances by lowering or increasing the luminance (brightness) and chroma (color).

Digital cameras capture video and film in a raw format, meaning the color information is recorded but cannot be seen until color processing. The rushes are taken to the laboratory, where they are processed and scanned into a digital workflow if you're filming on film. The colorist's goal is to get the color into the picture in the best way.

Colourists modify the color in line with the director and cinematographer's vision once they have received the editing materials. They match separate video cuts by balancing color intensity and luminance so that no one shot stands out in the sequence. They can also provide inventive methods for dealing with picture issues. For example, they may know what to do with under or over-exposed videos or perhaps offer a day-for-night correction.

Colorists are also in charge of ensuring that the film follows relevant legislation regarding brightness levels and chroma.

The Duties Of a Film Colorist 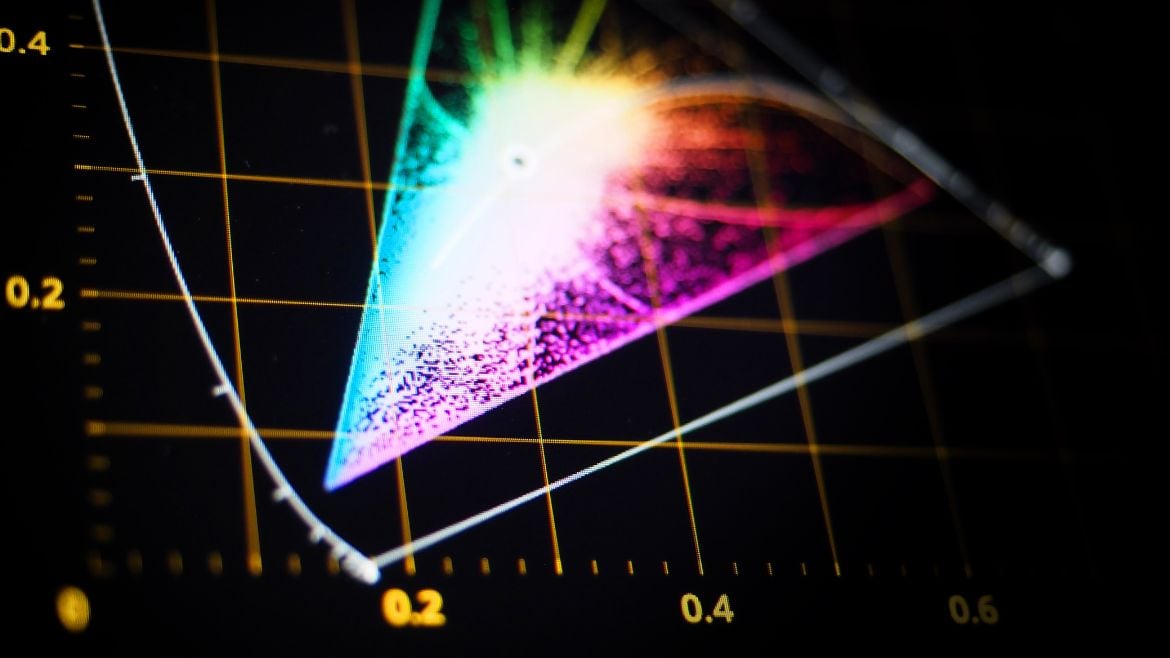 The responsibilities of a film colorist are often divided into two categories:

Color grading is the technical process of adjusting video footage for technical or artistic reasons. For example, a film colorist might improve the appearance of color, contrast, black levels, white balance, luminance, or saturation by color grading. Similarly, color grading might be done for various aesthetic reasons, such as changing the colors to create a particular mood or showcase a certain style.

Every film colorist has their personal approach to color grading, and the procedure may vary depending on the job. As a result of their expertise, many editors use manual color grading on every project to ensure uniformity throughout the production. However, some may utilize a LUT to grade more quickly and conveniently if it is created.

Color correction is a form of color grading. It's a procedure for correcting technical flaws to ensure that the video appears natural and realistic. Before color grading, many film colorists do color correction since it provides a more consistent foundation for the rest of the colors.

Color correction is most often concerned with lighting changes, and it's a critical operation because cameras record light. Because cameras capture light differently than the human eye, the result must be aesthetically pleasing.

Color correction may match footage from different lighting conditions, lighting sources, cameras, and viewpoints. It may also be used to optimize video before incorporating visual or special effects, and it aids the appearance of the effects.

What Is A Film Colorist Timeline? 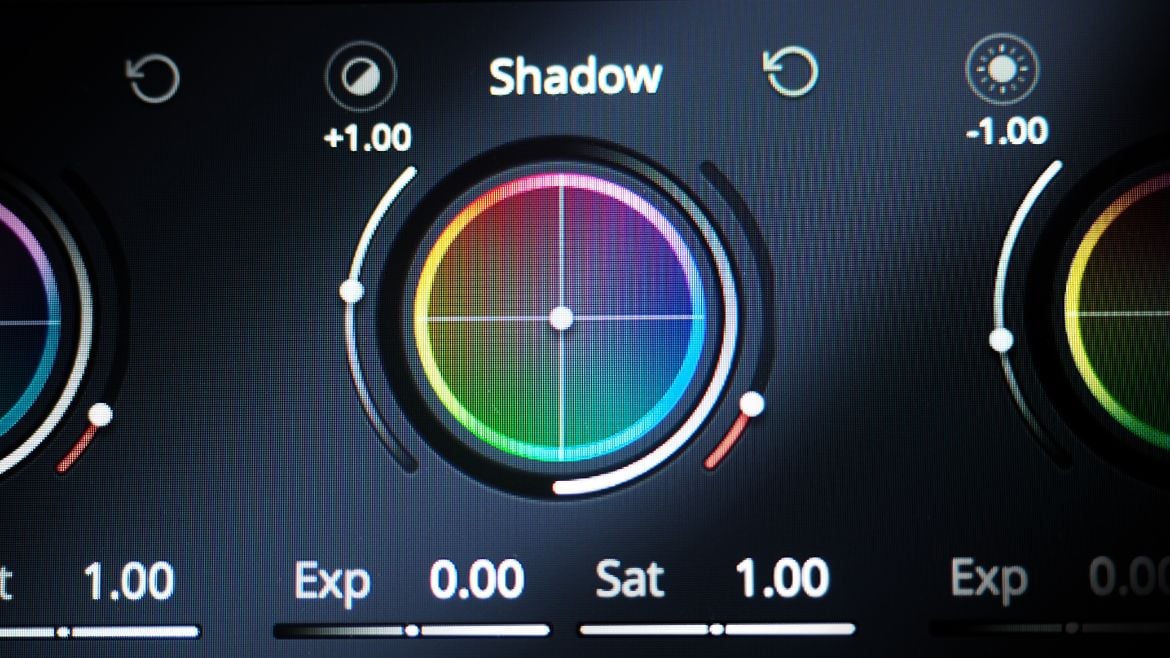 The colorist doesn't arrive until after the film has already been edited and the film has been "locked," which means there won't be any additional changes to the footage. Color correcting is a time-consuming process, and most movies can't afford to color-correct every scene.

Second, most editing is usually done "offline" or with a lower-quality video. This is done primarily to save time and data storage. A colorist will need the highest-quality video possible to import it into color grading software and perform their job.

They'll have a "spotting session" with the director, cinematographer, and editor to discuss what colors should be used in each scene. Before this can happen, the end-cut video has to be brought online (or transformed into a high-quality video file). This means that the colorist is one of the last individuals to touch the film before it debuts.

What Is The Workplace Of a Film Colorist Like? 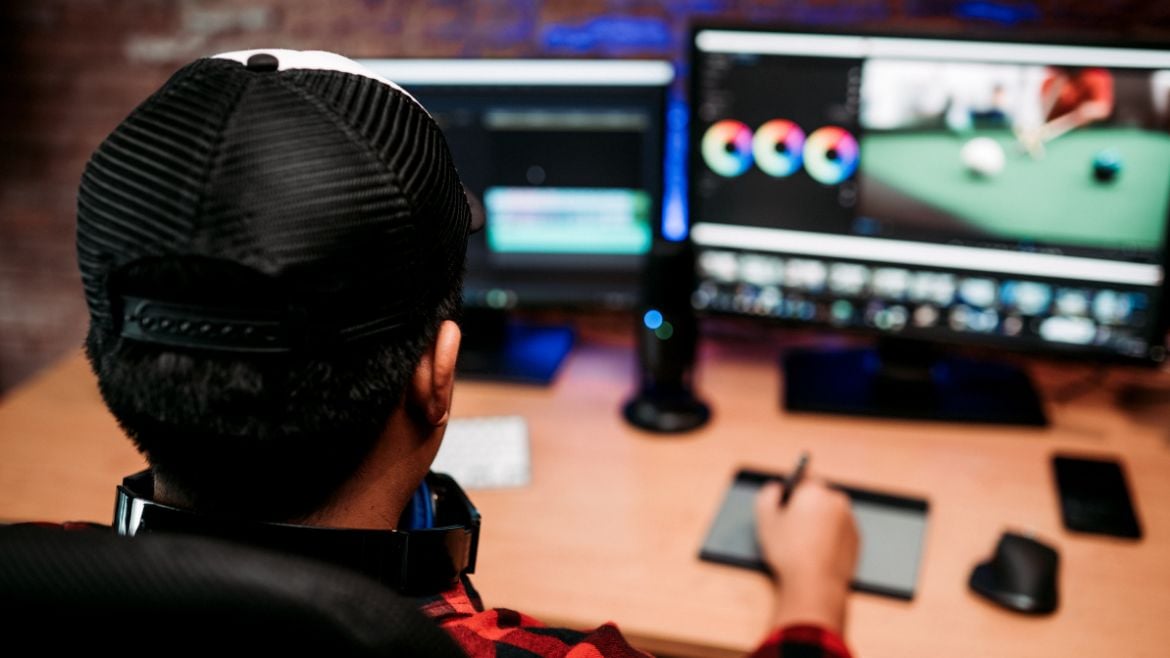 Most colorists work in post-production houses, where they grade film and video footage using specialized software. The most common software used by colorists is DaVinci Resolve, produced by Blackmagic Design.

Colorists typically work regular office hours, although they may be required to work overtime to meet deadlines. They often work on multiple projects simultaneously, so they need good time management skills to juggle different tasks and deadlines. The biggest challenges colorists face are dealing with difficult clients and managing data-heavy projects.

However, the job rewards can be significant, both in terms of satisfaction and remuneration. For those with a passion for color and creativity, a career as a colorist can be immensely rewarding. 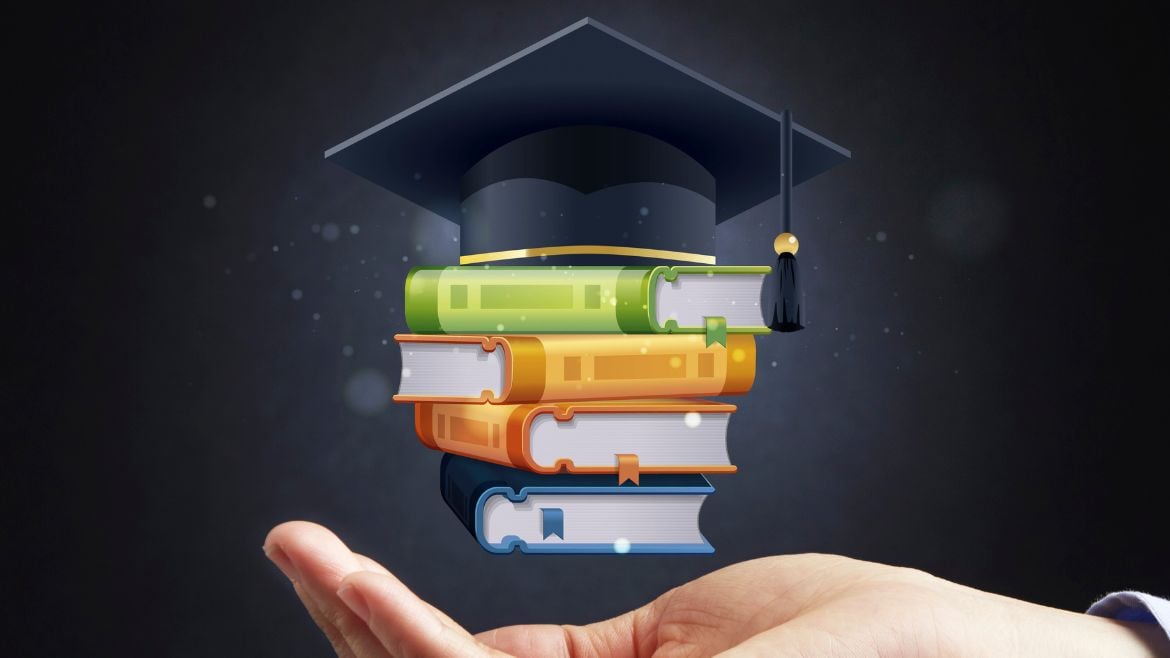 If you're considering becoming a colorist, it's probably because you enjoy movies and entertainment in general, which is another incentive for film school to be a great choice.

A degree in film or video production, editing, or cinematography will give you a good foundation of knowledge to build upon.

You'll need to be proficient in using color grading software, such as DaVinci Resolve, and have a strong understanding of color theory.

Many online courses and tutorials can teach you the basics of color grading. FMC Network Training has some of the best minds in the business at your doorstep through their Colorist Masterclasses. This blog post describes the best online courses to learn video editing, including color grading. These courses will give you a strong foundation to build your skills and knowledge.

Career Paths For a Film Colorist 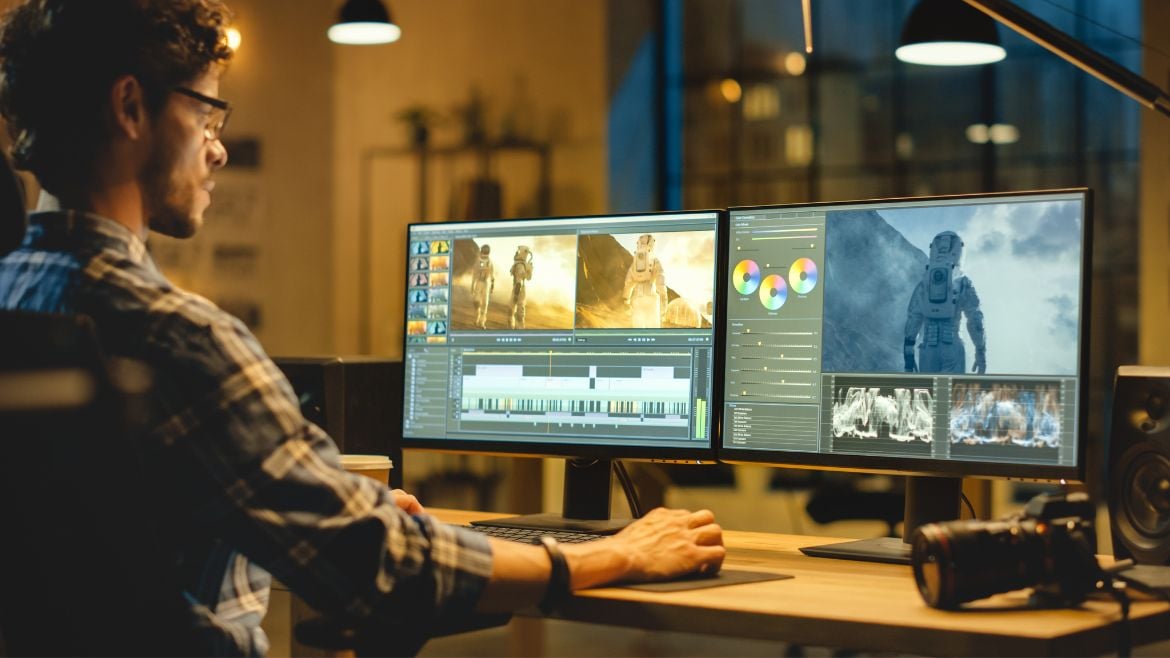 If you're interested in a career in film coloration, you can take a few different paths.

Whichever path you choose, a career in film coloration can be very rewarding. 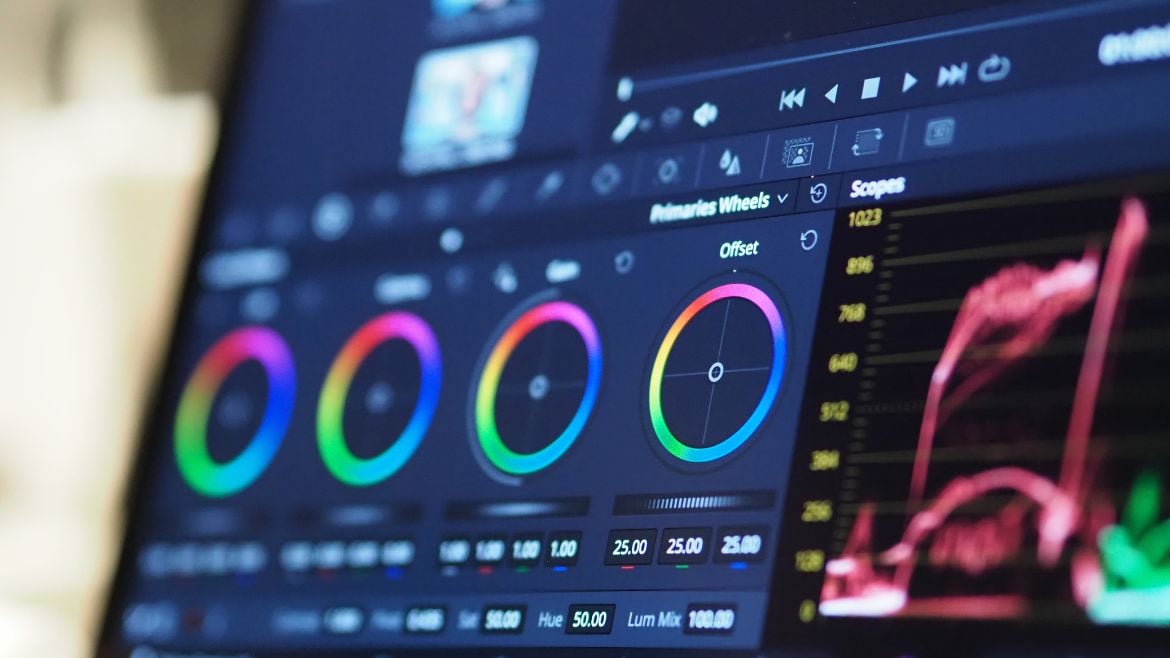 What's a colorist's salary? The typical colorist's yearly income is around $42,000, according to Glassdoor. The path of a colorist is not straightforward. You may be a freelance colorist earning on a project-to-project basis or a post-production firm. Salary can vary.

Different colorists may specialize in different areas. For example, a Hollywood colorist's income may differ greatly depending on whether they work in the studio or commercial sector. A colorist's income might be anywhere from $30,000 to $70,000.

How to Find a Film Colorist Jobs

There are a few ways to find colorist jobs. We suggest the following:

Work in a post-production studio

A lot of work goes into finishing a film prior to publication. The post-production studio handles all post-production tasks such as color correction, color grading, audio mixing, and finishing.  Getting a job in an entry-level position at a posthouse may benefit you as it will you further insight into a post-production professional career.

You'll be able to learn about the fundamentals of color grading from more experienced colorists who use expensive, specialized color grading hardware. Working your way up to or beginning as a colorist assistant will improve your chances of obtaining a colorist position at a post facility.

Employers will want to see samples of your work, just as they would for any other creative position. Create a reel that you can show them. Working on smaller projects will help you build your reel, allowing you to demonstrate your abilities.

Make connections with anyone you collaborate with. Continue to network online by looking for jobs or peers to collaborate with on LinkedIn and other social media groups. Networking is required to increase the chances of landing that perfect gig.

If you're looking for an innovative, fast-paced, and creative environment to launch your career, then look beyond our FMC training network! We have been helping individuals achieve their goals in this industry for a long time, so we know what it takes: 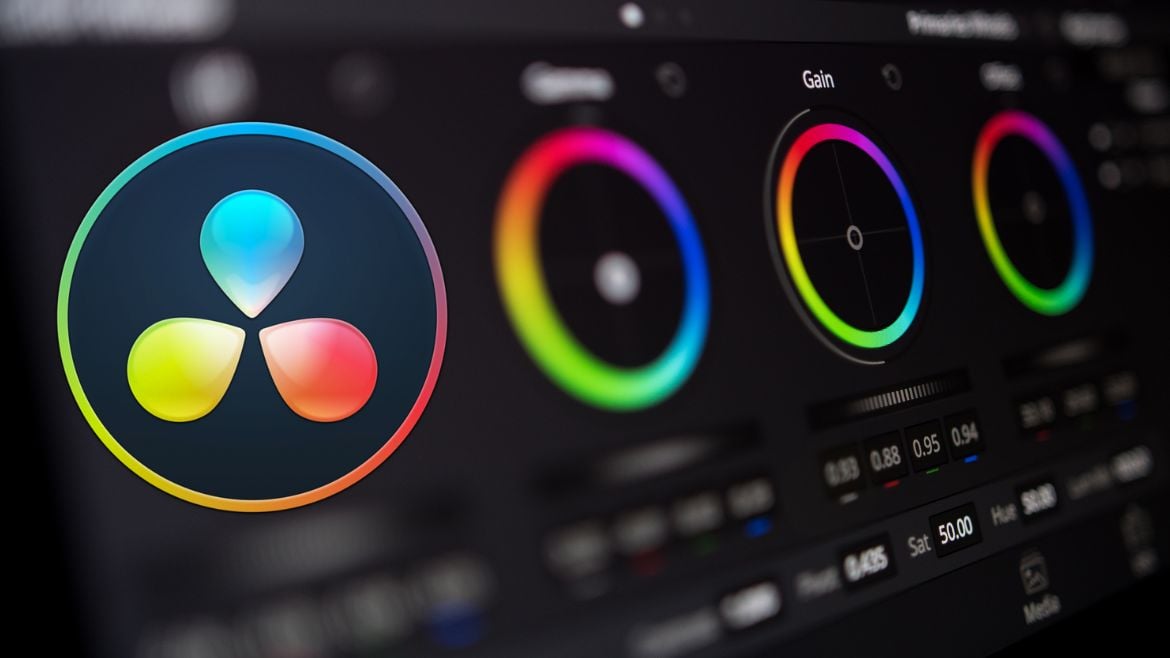 Use Code: BLOG10 At Checkout To Save 10% off our Online DaVinci Resolve Courses

DaVinci Resolve is a great video editing software that provides users with a wide range of tools and features, including the ability to edit and composite videos, add special effects, and create custom graphics.

DaVinci Resolve is best known for its powerful color grading that can be used to create beautiful and creative looks for your videos. In addition, the software comes with a wide range of templates and presets that make it easy to get started with your video editing projects.

Whether you're a beginner or a seasoned professional, DaVinci Resolve is excellent for your video editing needs.

When you're ready to take the plunge into becoming a colorist, remember that it's crucial to have a passion for the job, be skilled in using industry-standard software, and work well under pressure. You can turn your passion into a successful career with hard work and dedication.