Starting off, Maxon announced their latest release of Cinema 4D, Release 21. This new release is jam-packed with all new features and improvements! For starters, Release 21 is adding caps and bevels, allowing users to quickly and more easily extrude 3D logos and animate text. Next they added field force dynamic objects, offering flexibility and power to control dynamic forces in modeling and animation effects for optimized performance.

The mixamo control rigs allow for quicker and more customizable character animation, making your creations feel more alive than ever before! Multiple rendering improvements were also added to improve speed and quality of render outputs. Lastly, Release 21 adds workflow and core improvements to their interface, software, and UI!

While those technical announcements may have already excited you for Release 21, Maxon also announced a new, easier way to purchase their products. Cinema 4D Release 21 will only have one version, available to purchase in full or with Maxon’s new subscription plan! For only $60 per month you can get access to the latest release of Cinema 4D, their complete training program (Cineversity), and the entire Maxon plugin library. Compared to the full license cost this monthly option is much more affordable for the average user.

These are exciting new developments for the visual effects and animation communities! Between the newest edition of Cinema 4D (Release 21) and the new subscription model available for Cinema 4D, it’s an exciting time for visual effects artists. This new subscription model will allow people who could not afford the software the opportunity to try it out and experiment, leading to new projects and innovations.

As an additional bonus, for those who are looking to get started in Cinema 4D or further develop their skills, Maxon has launched their 3D Design + Motion Tour! 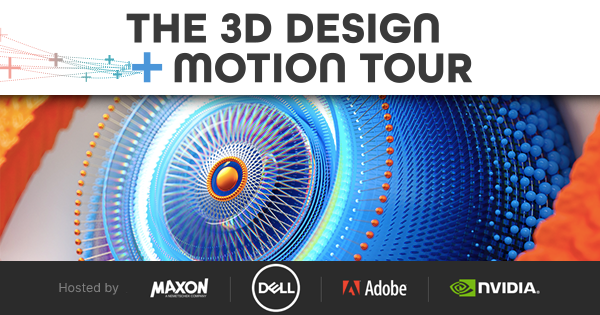 Join Maxon as they take their 3D Design + Motion Tour around the world, stopping in 26 different cities across the US and Europe. This one day event will demonstrate 3D production techniques used by one of the leading visual effects production companies, Perception. Having done the visual effects for some of the biggest movies ever (Spider-Man Far From Home and Black Panther to name a few!), these industry experts will give you valuable tips to take your animation to the next level!

FMC provides quality, consistent and accessible training for content creators and IT professionals.